A myomectomy is a surgery to remove fibroids without taking out the healthy tissue of the uterus. It is best for women who wish to have children after treatment for their fibroids or who wish to keep their uterus for other reasons. You can become pregnant after myomectomy. This procedure is considered standard of care for removing fibroids and preserving the uterus.

Myomectomy has traditionally been performed through a large abdominal incision, however, advances in technology have provided less invasive alternatives such as hysteroscopic and laparoscopic myomectomies. While this procedure is more invasive and time consuming for the surgeon, it affords patients the opportunity to remain fertile. A hysteroscopic myomectomy removes fibroids through the vagina. 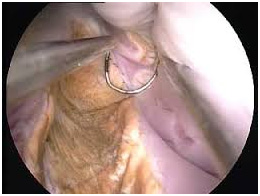 In this procedure, a long, thin scope with a light is passed through the vagina and cervix into the uterus. No incision is needed. The physician can look inside the uterus for fibroids and other problems, such as polyps. A camera also can be used with the scope.

“Submucous or intracavitary myomas are easily visualized and can be resected or removed using a wire loop or similar device. While submucous myomas can cause significant bleeding and anemia, their management is straightforward with hysteroscopic myomectomy.”

Patients usually are sent home after the procedure and have minimal need for recovery. The hospital stay can last from 30 minutes to 2 hours and recovery time is generally 1-2 days. Generally only fibroids that are small and accessible through the cavity can be treated this way.

FacebookEmail
Back to Posts

Notice: Trying to access array offset on value of type null in /home/customer/www/veerhospital.com/public_html/wp-content/plugins/js_composer/include/autoload/vc-shortcode-autoloader.php on line 64